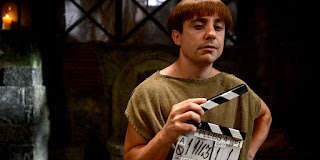 NEW PLEBS TONIGHT
TV's longest running Ancient Rome sitcom, PLEBS, starts tonight (Monday 10th) at 10pm on ITV2 with a double bill.
There are two deaths over the two episodes, so it's fair to say the show's got more gritty.

If you miss it, it'll be on the ITV hub www.itv.com and I guess Netflix eventually.

I've also got a bunch of stand up gigs coming up.

12th April - Watson's Wangabout - Mark Watson's night at Crouch End Arthouse Cinema.  Tickets and info here: www.skiddle.com/whats-on/London/Arthouse-Crouch-End/Watsons-Wangabout-April-Fools/13179635/
19th April - 100 Club, 100 Oxford St. Tickets and info here: www.showandtelluk.com/event/100-club-presents-with-james-acaster-3/
3rd May & 14th May - Arts Depot Finchley and Pleasance Islington. I'm doing two gigs with Ricky Gervais and David Earl and others. I don't have many details on this one I'm afraid. If you want to come, best keep an eye on Ricky's twitter feed and he'll announce them at some point soon (weirdly, most people will be coming to see him rather than me).
14th June - Stand Up Under the Stars at the BAC. Tickets and details here: www.showandtelluk.com/event/stand-up-under-the-stars/