For one thing, I'm headlining the Musical Comedy Awards at (London's) Bloomsbury Theatre on April 4th, which I think we can all agree is exactly the tonic we need after Brexit and the sham Trump impeachment trial.

All the details are here.
Also, if you enter the promo code TOM2020 when buying tickets you get money off. 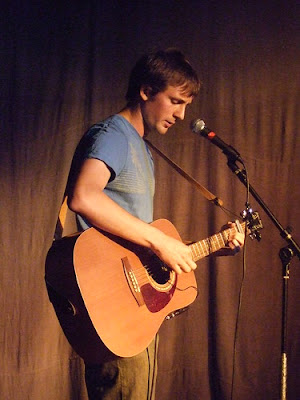 Because it's a musical-comedy-themed evening, it'll just be songs. So if you came to my show at the Soho Theatre last month and were all like 'Why were there only 3 songs in it, I want my money back etc etc'  - this gig will be way more up your street.

Equally, if you're one of those people who sometimes comes to a gig wanting to hear old songs I don't really play anymore, I will almost certainly do them all here / take requests, provided a) I can remember them and b) it's one of my songs and not, for example, I Gotta Feeling by the Black Eyed Peas.


[Here's a photo of me a fair while ago, wearing a t-shirt I no longer own, playing a guitar I subsequently sold to give you an idea of the sort of thing it'll look like. [But I'll be older. And probably in a shirt.]]